The 15 groups are now set for the inaugural edition of the highly-anticipated Leagues Cup 2023, the official Concacaf competition where all 47 clubs - 18 from LIGA MX and 29 from MLS - will play in a World Cup-style tournament that will qualify three clubs for the 2024 Concacaf Champions League. The inaugural edition of Leagues Cup will take place July 21- August 19, 2023.

As the 2022 MLS Cup champion, Los Angeles Football Club qualified directly into the Round of 32 of Leagues Cup 2023. LIGA MX champion Club de Fútbol Pachuca earned the bye as the LIGA MX champion with the most combined points accumulated across the Clausura and Apertura seasons in the 2022 calendar year.

The Leagues Cup 2023 groups are based on clubs' 2022 performance along with their geographic regions. The 15 groups will be broken up into four regions: West, Central, South and East. Each region will have four groups, except the West, which will have three groups due to LAFC’s entrance in the Knockout Stage. Pachuca will enter the Knockout Stage in the South, opposite side of the bracket from the MLS Cup Champion and opposite quadrant from the top MLS seeded club based on the final 2022 Supporters’ Shield standings. Since LAFC won the 2022 Supporters' Shield, the club in the opposite quadrant will be the team that finished second – the Philadelphia Union, who will be in Group 1 in the East Region (East 1).

The top 15 MLS clubs – excluding the MLS Cup champion – have been placed in their corresponding geographic region first, and then based on their position in the final 2022 Supporters’ Shield standings. The top 15 LIGA MX teams, based on the combined Clausura 2022 and Apertura 2022 standings – excluding the LIGA MX champion as described above – have been paired in reverse order with the top 15 MLS clubs (No. 15 LIGA MX seeded club has been paired with No. 1 MLS seeded club and so on).

Continuing with the competitive balance criteria, the remaining 13 MLS clubs have been placed in the groups, again based first on their geographic region, and then based on their position in the final 2022 Supporters’ Shield standings.

With the MLS clubs placed into groups, the South and East regions have one remaining slot each. Based on the combined Clausura 2022 and Apertura 2022 standings, the last two remaining LIGA MX clubs, FC Juarez and Querétaro, have been placed in the open positions in these two regions to complete the groups. Placed in reverse order from the highest seed in each group, Querétaro (No. 17 LIGA MX) and FC Juarez (No. 16 LIGA MX) have been respectively paired with Philadelphia Union (No. 1 MLS) in the East and Austin FC (No. 3 MLS) in the South. 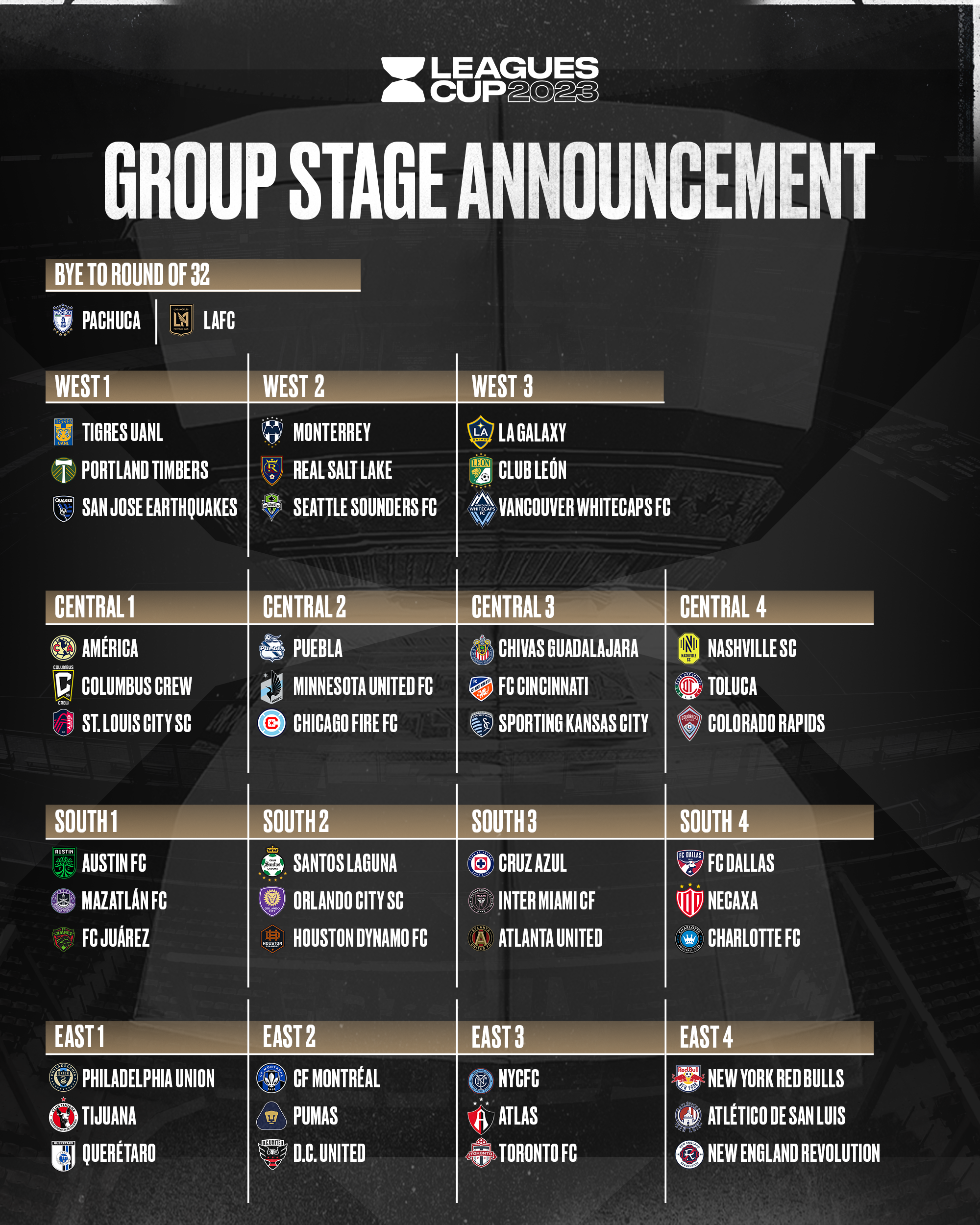 Every team will play two matches in the Group Stage, with the top two teams from each group, as determined by points, advancing to the Knockout Stage Round of 32. No matches in the Leagues Cup Group Stage will end in a tie. If a game is tied after 90 minutes, the game will proceed to a penalty shootout. For tiebreakers and other competition items, the Leagues Cup 2023 Competition Guidelines will be published in the coming months.

The Leagues Cup 2023 bracket and schedule will be announced in the coming months.

Beginning in 2023, MLS and LIGA MX will pause their respective league seasons each summer and all 47 first division clubs in Canada, Mexico and the United States will compete in the World Cup-style tournament, which is an official Concacaf competition. The inaugural Leagues Cup will consist of 77 matches, kicking off on Friday, July 21, with the final taking place on Saturday, August 19. The tournament will be played across the U.S. and Canada. The champion, as well as the second and third-place finishers will qualify for the Concacaf Champions League and have an opportunity to earn a spot in the FIFA Club World Cup.

Fans around the world will be able to watch Leagues Cup* on MLS Season Pass on the Apple TV app, which is available on Apple devices, smart TVs, streaming devices from Roku, Amazon, and Google, game consoles, and the web at  tv.apple.com.

In addition, TelevisaUnivision, FOX Sports, TSN and RDS will be the linear broadcast home for select Leagues Cup matches. The Leagues Cup Final will be available on Univision in Spanish.

As previously announced, IMG Arena will be the data distribution partner for Leagues Cup. The complete details on the Leagues Cup format can be viewed here.